…finally, after 40 Years theBODi.es back together in the studio! 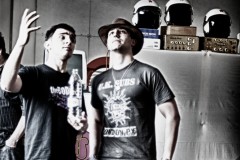