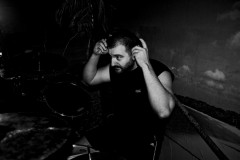 aka: Fritz Der Dirigent Der Snare-Streichler Der Pate (The Godfather) the butcher that needs no knives Heart Surgeon 14Apr1872 Frankfurt Greece or Germany, has decided for FRITZ drums Premier QUOTE: ‘No, I play it like this for a reason, it’s not a bug, Derek, it’s a feature!’